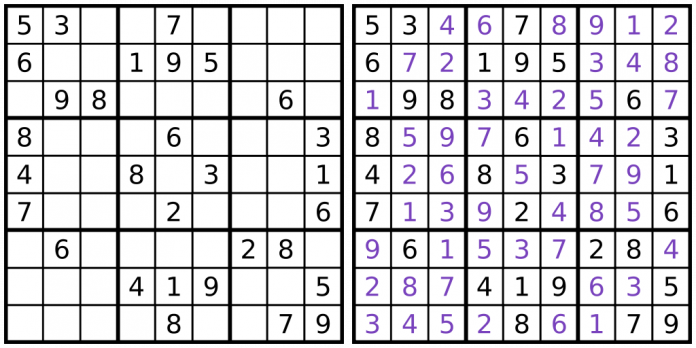 Solving a sudoku puzzle is a matter of technique. How to play sudoku Applying the methods we present, you will not find easy or intermediate sudoku that resists you.

Its origins date back to the United States, although it gained great popularity in Japan. Since 2005 it is international, papular wherever it is. Typically, it looks like a 9 x 9 crossword grid with 81 squares grouped into nine inner yards with 3 x 3 dimensions. In the game, no numbers should be repeated in the same row, column, or grid. The best of all is that in this game, there cannot be two solutions. There is only one.

How do you play Sudoku?: How to play sudoku 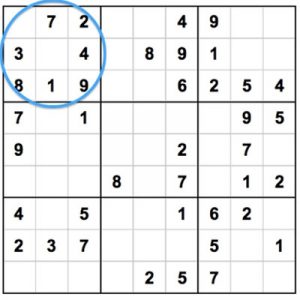 The game begins with some boxes already filled in by numbers. The objective is to fill in the empty boxes with numbers from 1 to 9. It is only worth putting one number for each box. Also, a number can only appear once in each row, once in each column, and once in each region. This makes it more complex, and you have to think more about the exact number.

Although the measurements above, another size can be used, that increase difficulty. On the other hand, the regions do not always have to be square. They can be of different shapes. They can even be made with letters, shapes, or colours without altering the rules of this game. This is for expert players. There are different levels of difficulty, and playing requires a lot of patience and some logical skills. With your practice, you gain a lot of mental agility, and many teachers worldwide recommend it. But not only for this but also because it helps to develop logical reasoning.

Tips to solve a sudoku puzzle at the beginner level

You can say that there are three basic level strategies for solving sudoku puzzles. These are tracking, marking, and analysis, each one being very different from the other.

The first strategy consists of tracing the length and breadth of the Sudoku game by a specific number anywhere on the grid. In this way, we can easily see where there can be no more repetition of that number.

The following strategy is when the first one is not useful because we cannot discover new numbers. With the markup, we turn to logical analysis, something essential to solving this kind of game. Subscript and dot notations are commonly used. With the subscripts, we write the candidate numbers small. If the Sudoku squares are tiny, we will have to make a larger copy to develop it better. Dot notation is more subtle. For example, a point in the upper left corner represents 1. A moment in the lower right corner represents 9. Mentally we can create a subdivision of nine points of each square. Although it is practical, this method is not for a newcomer and confuse.

The analysis is the third strategy. It is a method that involves crossing out numbers written in a higher list. As if we were talking about trial and error tests, something that helps us discover numbers that may be leaving our attention.

If we manage to master these three strategies well and we help ourselves with the following video, we will be able to solve Sudokus at a beginner level:

Other useful game strategies: How to play sudoku

It is highly recommended to start with the most frequent numbers. They are usually easier to guess the missing numbers when there are more equal numbers of the same value. When there are eight equal numbers distributed on the board, the ninth position will be of great importance.How to solve a sudoku puzzle

A method that consists of elimination use. You can remove the numbers from the boxes or boxes for a number. The cells can examine by eliminating the numbers from 1 to 9 in the row and column, and that cannot go there until we have only one number, which will be the correct one.

Another system is to eliminate the boxes in each region gradually. To do this, we will have to pay close attention to the figures that exist throughout the matrix. We must make a sweep that either obscures or puts crosses in the boxes where there cannot be a particular figure. So, when there is a free gap in a single container in a region, this is where this figure will have to go.

It never hurts to use a pencil and an eraser, because surely we will make many mistakes when we start. When this happens, on many occasions, we will have to go back in our movements or even erase everything.

If we have to start over, it is best to have filled in the spaces with a pencil and not with a ballpoint pen. Only when you are sure of the precise number can the pen use. Doubtful numbers should always be in pencil. We must always bear in mind that Sudoku has only one solution.

If you keep this in mind, it may seem more than evident that each number discovered in each box will have to be only one of all possible numbers. Each step take deduce by logic, and all the efforts go to a single solution. Therefore, we only have to mark as good those numbers that are possible in each box.

At first, it can be a bit frustrating because things will not turn out as quickly as we could hope. Everything will change when we see that, little by little, the expected results are coming out, at which point we will want to advance in level.

Read Also: How does roku work