How to shuffle cards? 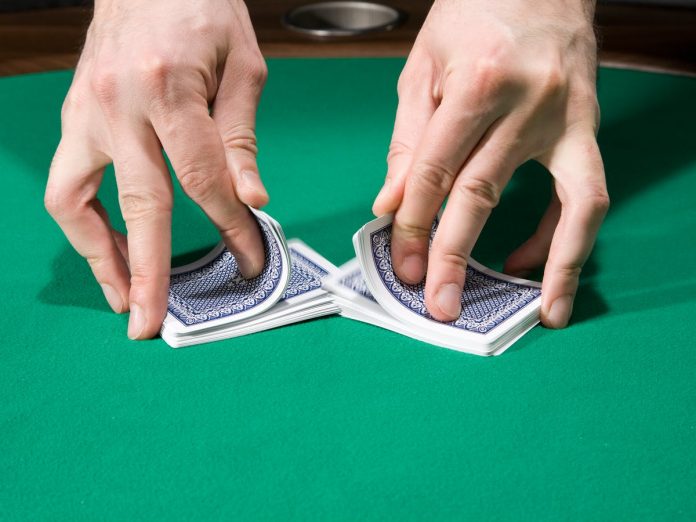 How to shuffle cards. The mixing of cards has a special meaning in almost all card games. It describes the generation of a random order of the playing cards in a deck of cards. The removal of the cards usually follows the shuffling. 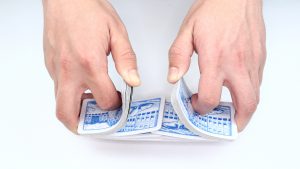 There are several methods of shuffling cards. Of course, specific techniques result in a better mix, while other plans are easier to learn, use, or better suited to particular situations.

The most common method calls riffle shuffle in English and is known in German as bow shuffling. One-half of the cards in each hand arch inwards with the thumb. Then the thumbs release the cards at the same time so that they interlock unevenly. In the last step, the two halves push into one another.

The riffle shuffle can do both in the air and on the table. The latter is a requirement in most casinos to prevent spying on the lower cards. With casino riffle shuffle, the halves place on the table with their narrow sides facing each other so that their back corners touch. Then the rear edges lift with the thumbs, and the halves are first interlocked and then pushed together.

One disadvantage of riffle shuffle is the risk that poor quality cards can bend if shuffled carelessly. In the case of games of chance, however, it is customary and advisable to exchange playing cards at least once in the course of an evening.

Overhand mixing is another technique that is particularly popular with amateurs. The cards usually hold on the narrow sides in one hand. With the thumb, on the other hand, more miniature packs of cards gradually pull into it. Compared to rifle mixing, it takes significantly longer and requires more mixing operations to achieve a similar level of mixing. In addition, it offers far more opportunities for manipulation and is therefore not useful in casinos.

PRESS INTO EACH OTHER, AND FAN

Nesting is a method of squeezing the ends of the two halves of the deck of cards against each other to blend. This requires skill and practice, as does fanning, in which the halves are spread out in the form of a fan and pushed into one another.

STACK: How to shuffle cards

Building stacks is not a randomization method but uses to lose cards that are stuck together. The cards sort into stacks in turn so that cards that were previously next to each other are now separate.

WHAT ROLE DOES CHANCE PLAY IN SHUFFLING CARDS?

Usually, the pile does not shuffle until five good rifles, and it’s not random until after seven. (If the mixing methods are poor, of course, more mixing processes require).

Another opinion is that six shuffles are sufficient. The difference depends on how the randomness of a deck of cards measures. Diaconis used a susceptible test for chance and therefore came up with a higher result. There are even more sensitive measures, and the question of which action is best for certain card games is still unanswered.

EXAMPLE OF AN EXTREMELY SENSITIVE TEST: How to shuffle cards

Take a Rummy sheet without a joker (i.e., with 52 cards) and divide it up by color, with two colors sorted in ascending order (from ace to king) and two colors in descending order (from king to authority). Mix it up as you see fit. Then go through the deck of cards and layout each suit in the correct order (ace, two, three, etc.). When you get to the end of the stack, start over. How many times did you have to go through the pile?

In this test, you can see how many ascending sequences are left in each color. You will likely need more blending than you would think to eliminate both the ascending and descending lines in each color.

SHUFFLING CARDS IN PRACTICE: How to shuffle cards

In practice, the number of riffles you need depends on how good you are at mixing and how good your fellow players are at noticing and using the lack of chance. Two to four shuffles are enough for the fun game. In tournament play, however, good bridge players use the lack of luck after four shuffles, and the best blackjack players can chase aces through the deck of cards.

There is no manageable method of randomly shuffling a deck of cards. The most reliable, but also the most impractical, the way is to rummage through a deck of cards. Even the popular pushing into one another or leafing through one another hardly changes the order of the cards in the deck of cards, even after many rounds about the number of shuffles.
Also Read: How to clean jewelry