How does a coconut open? 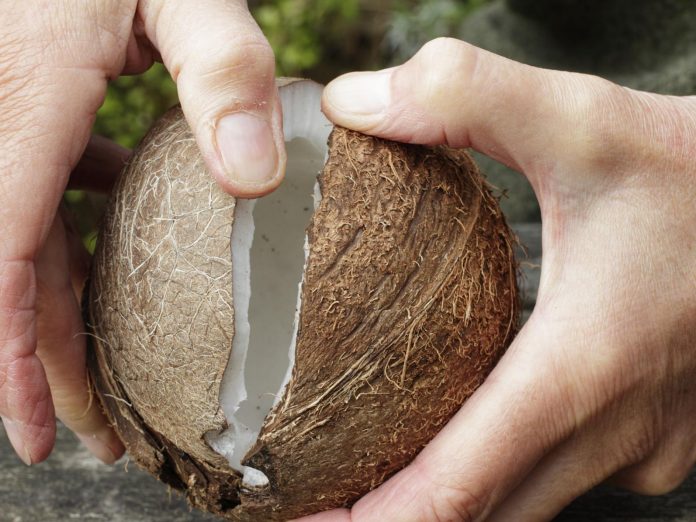 Coconut is a very beneficial fruit and can also be eaten as a snack. However, opening the coconut can be a bit difficult. Let’s see how to open a coconut at home in the simplest way possible.

The coconut is a tropical fruit that we all know. Suppose we do not find the nut already open and cut. In that case, a problem encountered in the consumption of this fruit is trivially constituted by being able to open the coconut, which is very hard and difficult to open. How, then, to break its outer shell? Let’s see four simple steps to open a coconut.

How to open a coconut with ease

First, you have to identify the three lighter “circles” placed in the upper part of the coconut. Have you seen them? Well, now take an awl or screwdriver and, with the help of a hammer, pierce these three clear spots. Once the holes have been opened, pour the coconut water into a container to use when you prefer (you can also drink it naturally).

Now that the coconut is empty, you can proceed with the actual opening. Take the hammer and give a few strong blows on the nut to break it into several parts. If you are afraid of splashing out the coconut pieces, you can wrap the nut in some plastic wrap or a tea towel. Alternatively, if you want to open the nut in two equal parts, take a heavy knife, place it on top of the coconut, and with the hammer, strike firm blows on the blade to break the coconut into two equal parts. At this stage, it is essential to be careful not to injure your fingers!

Separate the pulp from the shell

Now that you have opened the coconut into several pieces, you must remove the shell’s white part (i.e., the pulp). To do this, you can use a knife (be careful not to get hurt!). Alternatively, take a spoon and try to do the same. If you are lucky enough to find a green coconut (also called young coconut), you will notice that the pulp is much more media, and you can extract it without problems with a simple spoon. 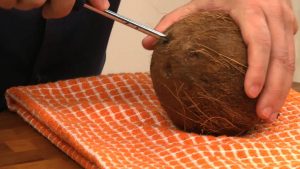 Now you can eat coconut

Now your delicious coconut is ready to eat! If you find it, we recommend that you also try the so-called “young coconut” or the young coconut. Which is entirely green on the outside. Once opened (generally, they are already processed to be opened easily), it is possible to eat the pulp with a spoon, given its incredible softness.

On the other hand, if you want to try to prepare coconut milk starting from the pulp of the fruit.

Storage To keep the coconut for a few days, you can soak it in its liquid and keep it in the fridge.

Also read: How to grow potato.