Difference between structure and union 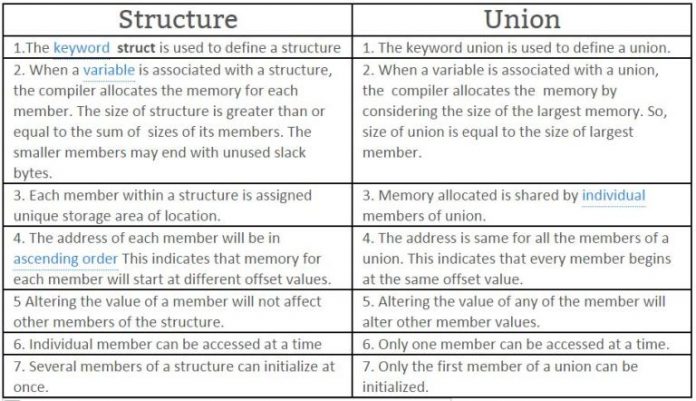 sC++ creates custom data by using five ways provided by the C language. These ways are structure, bit-field, union, enumeration, and typedef. This article will talk about the differences between structure and union. However, these both are examples of container data that stores data of any “type.”

What is a structure?

A user-defined data type available in C is called a structure. A structure provides aid in consolidating data items of several kinds. The structure is known to represent records.

A structure is a compilation of variables from various data types that are given a common name. The term “members” refers to the variables in a form. These members of the structure are “public.” After declaring structure, the compiler creates a template that can be used to produce structure objects. These structure objects share the same organization that of data members and member functions. The keyword “struct” introduces the declaration of structure.

What is a Union?

When two or more distinct variables in a single union type share a memory location, this memory location is called a Union. ‘Union” is the keyword to declare a union. A Union consists of member functions and variables. These members of the union are public. Union and structure are stated in the same way.

Always remember these tips for a standard union declaration. Firstly, constructor and destructor can be a part of its definition. There are multiple ways provided by union to view the exact memory location. A class of any type cannot inherit by a block, and it cannot take a base class. There are no virtual member functions or static variables in a union.

Are there any similarities between structure and a union?

A structure and union have a few similarities. For example, they have the same method of declaring, creating variables, and locating members of the variables. They both can be passed to a function by a similar method. These methods are known as call by value and call by reference. As mentioned above, union and structure are known as container data types. They have structure, union, and array as their member. Moreover, they contain the object of any data type.

The members of Union and Structure can be objects of any type. These objects can be structures, unions, or arrays of others. Their members can have a bit field. They both carry assignments and the size of operators. A job can have two or more structures or unions with the same members and member types. They can transfer by value to function and restore by value by function.

They both carry assignments and the size of operators. A job can have two or more structures or unions with the same members and member types. They can transfer by value to function and be restored by weight by the process. Members accessed using the ‘.’ operator.

What is the difference between structure and union?

As we understood previously, members of the union share the exact memory location so that the block can store a single value simultaneously. However, the structure can have multiple memory values as it has

Let’s look at the bases on which we can differentiate between structure and union.

The declaration of a structure is: struct struct_name{

The declaration of a Union is: union u_name{

The keyword of structure is “struct” and the keyword for “union.”

Various values of different members store in a structure. A single value store at a time for all members of the union.

Anonymous unions can declare, but a structure doesn’t have any anonymous feature.

Structures and Unions contain the member of different types, hence known as container data type. Unions are applied during type conversions, and forms are used when all members’ distinct value has been stored in a special memory.

Also, read the Difference between stack and queue.

Difference between private and public company

Difference between percentage and percentile

Difference between HTML and html5