Difference between private and public company

When people work together to achieve one specific goal, they become a legal entity known as a company—the difference between private and public companies. A company is also known as an enterprise, can be industrial or commercial. Usually, the tax paid by a company defines its type. Every company is taxed differently, according to its structure and worth.

We want to share a few definitions of a company from various sources. The definition of a company from the Indian Act 2013 says: ‘‘A registered association which is an artificial legal person, having an independent legal entity with perpetual succession, a common seal for its signatures, a common capital comprised of transferable shares and carrying. Limited liability.’’

The legal definition of the US says: ‘‘A company can be a corporation, partnership, association, joint-stock company, trust fund, or organized group of persons, whether incorporated or not, and (in official capacity) any receiver, trustee in bankruptcy, or similar official, or liquidating agent, for any of the previous.’’

The legal definition of the UK says: ‘‘A company is a body corporate or an incorporated business organization registered under the company’s act. It can be limited or unlimited company, private or a public company, company limited by guarantee or a company having a share capital, or a community interest company.’’

To become a company, these features must be incorporated:

What is a private company?

Sole proprietorships: This is a business where there is only one owner. The owner has to bear unlimited liabilities like debts etc. The assets, capital, liability, and all obligations controlled by one person only. However, he can hire people to do work for his business. But if a company falls into debt, then the owner of a sole proprietorship has to sell his assets.

Partnership: A partnership is similar to a sole proprietorship in many ways. But here, the company owned and managed by two or more people who join hands to achieve the same goal. The partners of this company have to bear unlimited personal liability if a company falls into debt. The partnership is divided into three types: general, limited, and limited liability.

The main bases that categorize the private companies into four types are:

Every company in the United States of America started as a private company. The renowned companies with annual revenue of $25billion and above. Such as Cargill, Koch Industries, Deloitte, and PricewaterhouseCoopers choose to stay private.

There are two reasons that companies always want to be private. Firstly, the ownership of the company stays within family and friends. Secondly, they keep themself away to avoid regulatory and government scrutiny.

What is a public company?

In business language, a public company sells its shares to the general public. A public company also known as a public limited company or publicly-traded company. Such companies facilitate the general public to become business owners according to their share capital in the business. These shares sold in a stock market from where brokers, investors, and traders buy them. New York stock exchange and NASDAQ the most renowned stock exchanges where thousands of company shares listed. Apart from these, there are several stock exchanges in every country.

The main bases that categorize the public companies are:

The disadvantages of a public company are minimal control of investors, risk, and regulation.

What is the difference between private and public companies?

Let’s have a look at the differences between private and public companies side by side. 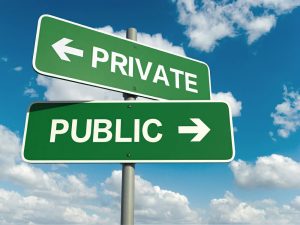 Since we read a lot about public and private companies in this article, it is easy to say that establishing a company is not a piece of cake. Whether it’s a public or a private company, it requires a lot of paperwork and physical work. However, the company raises capital for you, which you can never gain while working alone.

Before you decide to make a company, you must search about the types of companies. And which one will suit you best according to your finances and demands.

Difference between structure and union

Difference between percentage and percentile

Difference between HTML and html5